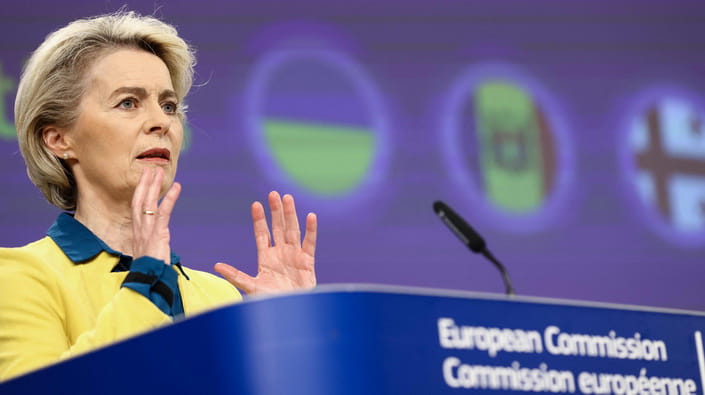 June 17 was a very good day for Ukraine. Ukraine has won on this front: the European Commission has confirmed that it deserved candidate status.

Currently, the Ukrainian authorities are publicly responding positively to this decision. But if the EU summit approves it as planned, some will not like it. Moreover, both the government and the opposition may be dissatisfied.

On the other hand, this decision is even better than expected for society, reform supporters, and those who want to implement European rules in Ukraine.

However, with candidate status, Brussels demanded reforms from Kyiv. And some of them the government has long avoided. The list also includes reforms that will make their predecessors unhappy.

Same as Moldova but Different from Georgia

"We are grateful to European taxpayers for helping to reform our country. Despite this sad news, we believe the Georgian people are part of the European family." Many Georgian journalists said that at a Friday briefing at the European Commission.

The thing is that only Georgia has been denied candidate status out of three applied countries.

Even though EC President Ursula von der Leyen tried to convince Georgians to be glad about the "recognition of Georgia's European perspective," the text of the Commission's opinion was devastating. You can just read the list of requirements that Tbilisi must meet to resume negotiations on the candidacy.

Let's be honest: the EU is waiting for a change of government in Tbilisi.

Because during the confrontation between Ivanishvili and Saakashvili, it is hard to meet the required criteria.

Instead, the opinions on Moldova and Ukraine are fundamentally different.

The European Commission has recommended granting both countries full candidacy. However, Brussels demands more from Moldova than Ukraine.

With the publication of the European Commission opinion, it has become clear that membership negotiations are not on the agenda. This stage has been postponed.

And Ukraine has to meet the listed requirements to retain its candidate status.

The document clearly states that the current candidacy granting is not final. The EU may revoke it if official Kyiv ignores the reform plan (the same applies to Chisinau).

Ukraine Cannot Run Away from Reforms

It is not about seven EU requirements. It is about seven blocks of reforms that the European Union has identified as a condition for maintaining candidate status:

(3) Fight against corruption; appointment of a new head of the Specialised Anti-Corruption Prosecutor's Office

It seems Brussels have added to the real demands for reforms some new ones, just to calm down some European capitals and ensure that they will not block candidate status at the summit.

Let's analyze them, starting with the less important and ending with the most significant.

This requirement is on the list to appease Hungary. A high-ranking European official, who wants to stay anonymous, stressed that the European Commission itself, not Hungary, will assess the implementation of this requirement.

These two requirements look surprising. The European Commission itself could not explain detailed what exactly the claims are.

Some people believe one of the EU countries required that. Brussels decided just to write it down and then make some changes to the legislation, announcing that Ukraine met the requirement. Other people claim this condition will let Ukraine easily "demonstrate progress."

So that the current government does not see this as a carte blanche for random "deoligarchism," the EC has come up with a fuse. The law must pass the Venice Commission and, if necessary, be amended accordingly. This document was submitted to the Venice Commission last autumn. We still do not know the date of the conclusion. However, there is a chance the Commission will smash it to pieces.

This requirement contains two conditions. One of them is to "complete the appointment of a new head of the Specialised Anti-Corruption Prosecutor's Office through certifying the identified winner of the competition."

As you know, the Office of the President of Ukraine has been blocking the winner since last year. It has already become unacceptable because Zelensky personally promised President Biden and von der Leyen to sort it out. But nothing has changed.

Based on that, the EU has taken an unprecedented step. First time ever, they demand the appointment of a specific person.

And Ukraine's candidacy is conditioned on this appointment.

This requirement will test Zelensky's desire to complete real reforms in the judiciary system.

Judicial Reform and the Constitutional Court

Ukraine must finally appoint professional judges to the Constitutional Court and introduce a pre-selection process. The EU is waiting to finalize the integrity vetting of the candidates for the High Council of Justice members by the Ethics Council and establish the High Qualification Commission of Judges of Ukraine.

But the question remains: what will happen if President Zelensky and the Verkhovna Rada fail to meet these requirements?

Will They Abolish Our Candidate Status?

The decision taken by the European Commission on Ukraine (and Moldova) is unprecedented. The EU has never done this before.

Brussels usually says the state is ready to apply and recommends starting membership negotiations. Or it admits that it is not ready and offers to return to it later when the applicant gets more European.

They came up with a hybrid for Ukraine.

In fact, Brussels said that Ukraine was not yet ready to become a candidate, but it granted candidacy right now.

The seven requirements described above need to be implemented to maintain candidate status.

How Will It Work?

And when can Ukraine move to the next stage?

We must be aware that there is no chance to start negotiations until the end of the active war. The EU cannot negotiate the accession when they do not know what the state will look like in the near future. Moreover, it is impossible to carry out systemic reforms during martial law. Due to this, there is no deadline for fulfilling these seven requirements.

The threat of losing candidate status will be an even more powerful lever. Society will not allow the government to cross this red line.

The most important is the process has started, and the EU leaders have agreed to back Ukraine. And the speed of this process, which will begin after our victory in the war, will depend solely on us.

NATO Declares Russia Its 'Most Direct Threat'
Kuleba to OSCE: Suspend Russia or It Will Destroy OSCE
Kuleba Calls for Gazprombank to Be Banned from Swift
Zelensky on Mall Strike in Kremenchuk: The UN Should Punish Any Terrorist State