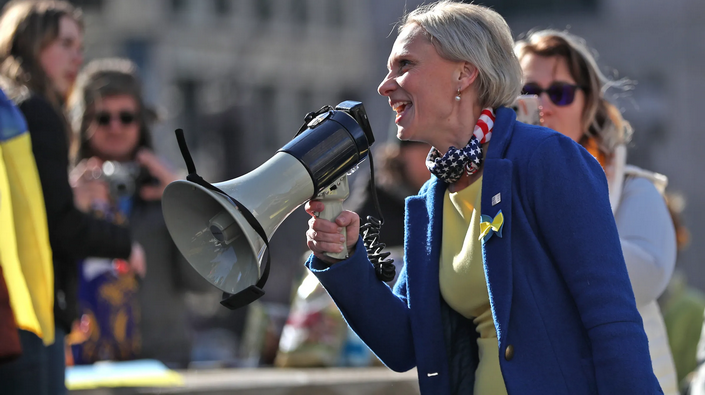 The congresswoman, who had never spoken with Ukrainian media before and had not cared about Ukraine, turned into the main newsmaker in Ukraine in just three days - after publishing a harsh letter to President Biden and demands for Ukraine.

Her statements caused a diametrically opposite reaction among Ukrainians - from full support to objections and sometimes even allegations against the congresswoman. The topic turned into a conflict: each party considered their position justified. They do not seem to compromise.

We should take a look behind these emotions. The main thing remains in the shadows - her signals. And they do need our attention.

After all, the "Ukrainian issue" is about to shape the elections agenda in the USA in 2022.

We should underline: Spartz's opinion is not decisive in U.S. politics or the election campaign. It has no party weight.

But we cannot say she is just an "influential and scandalous congresswoman," and therefore, "we should not pay attention to her" would be a severe mistake for Kyiv.

Her public demands on Kyiv reflect the line of a Republican Party wing. They are trying to get President Biden into a zugzwang: to accuse him that he can neither ignore nor fix them without losing ratings.

The only question now is whether U.S. assistance to Ukraine will become the main reason for the fight between Biden's opponents and his party.

And for this, paradoxically, the Ukrainian government will have to fulfill part of Victoria Spartz's demands.

What threatens the elections in the USA?

On November 8, 2022, midterm elections will be held in the United States.

In Ukraine, we usually focus on another election campaign in the U.S. - the presidential one, which will be held in 2024. However, the 2022 elections may be decisive for Ukraine. After all, military assistance is not only President Biden's will. The Congress, which approves all budget allocations for assistance to Ukraine, also plays a crucial role.

On November 8, Americans will elect one-third of the Senate and the whole House.

Democrats, Biden's fellow party members, currently retain control of both chambers. But after the 2022 elections, as analysts predict, the president will lose his majority in at least one, and most likely, both houses of Congress.

It might seem Ukraine has nothing to worry about: it has bipartisan support in the USA in its fight against Russia. Therefore, we will get votes for "our" bills.

However, there is an even worse situation. If during and as a result of the pre-election battles, the exact procedure of assistance to Ukraine changes. We hear about such proposals nowadays, and Victoria Spartz warns about them.

What kind of monitoring does Victoria Spartz mean?

Ukrainians paid the most attention to the demands and allegations, which are important for the Ukrainian audience, such as the appointment of an independent anti-corruption prosecutor or the inadmissibility of the scandalous OPU head, Oleh Tatarov.

On Monday, when the scandal developed, Spartz came out with a renewed demand for the resignation of Andrii Yermak. It only fueled attention to her in Ukraine.

And for her - no matter how strongly it contrasts with Ukrainian expectations - the main thing is not SAPO head and Tatarov but the monitoring of American military assistance. Victoria Spartz emphasized that many times in her sensational interview.

"Ukrainians do not understand that Congress is responsible for monitoring and overseeing where and on what American money is spent. Our voters elected us for this!"

Spartz does not name a specific scheme for monitoring arms supplies but emphasizes that the U.S. does not know what happens to weapons once the Ukrainian border is crossed.

This is true. The Armed Forces of Ukraine should effectively use the latest weapons like the HIMARS without wasting time reporting to Washington.

European Pravda sources say Kyiv and Washington are in a dialogue about reporting. And although most congresspeople, including Spartz, cannot access the information about security negotiations, they may well ask this question before the election.

Victoria Spartz also warns this may even lead to a slowdown in assistance to Ukraine if Congress decides to introduce additional monitoring mechanisms - a serious challenge for Ukraine.

Although Victoria Spartz claims a "bipartisan concern" about monitoring, top Democratic Rep. Marcy Kaptur was quick to distance herself from this. The opposition is silent. And the elections are soon to happen. Therefore, Kyiv must accept the challenge seriously.

Who is against assistance to Ukraine?

When the statements and the first letters of Victoria Spartz appeared, Ukrainian Americanists wondered whether she was acting independently or if it was part of a larger game, a game against Ukraine.

Congresswoman Spartz represents the Republican Party. She is a part of the "Trumpist" group, the most conservative wing. They are very skeptical of Ukraine, and some parliamentarians, as many believe, support Russia.

Spartz herself is in no way pro-Russian.

However, insiders say that Spartz never turned into an active pro-Ukrainian politician.

With the beginning of her active information campaign, we wondered: is it a part of a larger campaign with an unpredictable outcome for Ukraine?

In an interview with EuroPravda, Victoria Spartz denied it. Indeed, the media loyal to Trump did not promote her statements. If Spartz's allegations made headlines in Ukraine, most media did not notice them in the United States.

What is dangerous, and what to do?

First of all, the USA now has no intention to stop the weaponry flow to Ukraine. The U.S. also needs the victory of Ukraine in the war against Russia. Personally, Biden needs it. It has become a political goal for him. That's why the U.S. will continue to back Ukraine.

They are even ready to continue turning a blind eye to certain issues in Kyiv.

But that makes the Biden administration an easy target for criticism from Spartz and the broader Republican circle.

Monitoring U.S. assistance to Ukraine (not only weaponry) is important for American voters.

Therefore, everyone who will start convincingly saying that American assistance can be spent inefficiently in Ukraine and that Biden is to blame for ignoring the lack of control and flaws with democracy will get political points. It doesn't matter if they can provide facts about corruption or only suspicions. It will be enough.

Kyiv needs to build a counter-defense against allegations of fund misuse. It should prove to the Biden administration that American money really works. The U.S. administration has to be sure about it even when it itself cannot monitor it due to the war.

It is rumored that the Ukrainian government already has drafted a bill introducing an electronic system safe for the military and agreed with Washington. If so, it should finally be adopted.

The United States despairs the appointment of an independent anti-corruption prosecutor. They are losing their faith that Kyiv plans to elect the head of NABU honestly.

The Republicans have already picked this issue for internal communication.

A lot depends on whether Kyiv will understand how serious the risks are and how quickly they have to act on that.

These decisions will define the future communication in the U.S., whether they will compare Ukraine with Afghanistan or not.

The Armed Forces of Ukraine prove every day on the battlefield they are completely different.

But the state should not forget to prove every day they are different also in terms of democracy and the Western world principles.