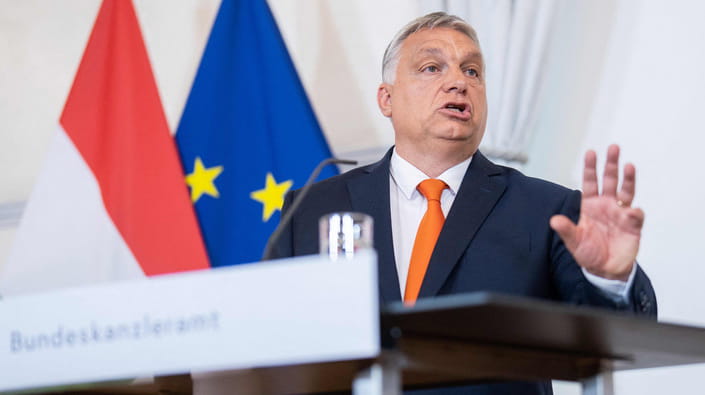 Every European politician can feel jealous of political stability in this country - Orbán's Fidesz party has already received a one-person constitutional majority in the parliament for four consecutive convocations. However, simultaneously cementing its power, Hungary is also cementing anti-democratic tendencies. In addition, it publicly and openly denies fundamental EU values.

This issue has been a topic for a long time, but in late July, it became urgent in European politics. Viktor Orbán has made it so with his statements, which he declared in the Tusvanyos camp.

Although the Hungarian leader devoted most of his speech to Ukraine and explained why he did not want to side with the civilized world regarding Russian aggression, European politicians got impressed by other points. For example, Orbán's racial purity of Hungary or that Hungary should defend itself against the West. And he hints that Hungary tolerates the EU as long as it pays.

Hungary has made its official policy confrontation with the EU.

Can the EU kick out Hungary if it acts contrary to Union's rules?

The EU cannot expel a member state. A country can leave the EU only voluntarily. It is a long and difficult process, as Brexit proved.

However, the EU has an alternative mechanism - a political nuclear weapon.

The EU Treaty, in exceptional cases, gives the right to suspend any rights of an EU member state if all other EU states agree that it "seriously and continuously" violates fundamental European values.

You may be surprised, but the EU prepared this "nuclear article" against Hungary... in 2017. The European Commission initiated the procedure against two member states that had apparently begun to digress the EU values​ - Hungary and Poland (controversial judicial reform).

But it is impossible to punish two countries at once because they need 26 out of 27 votes!

Everything changed with the Russian aggression.

When Orban openly sided with Russia in its war against Ukraine, it crossed the red line for Warsaw.

Brussels also understood the importance of the political moment. The European Commission has been negotiating with Warsaw to withdraw accusations by Article 7. The process has generally been progressing well.

It is slowly opening up the possibility of getting the Polish vote to punish Hungary if such an issue comes up on the agenda.

So, let's return to punishing Hungary for its reversal from democratic values. Firstly, it is possible to deprive the Orbán government of the right to vote in the EU. This option, which was purely theoretical, is now becoming real.

Secondly, the EU can punish Hungary financially. The European Commission has already launched this process. Moreover, the sums are large enough for the Hungarian budget to collapse simply. As a result, the government may fall after it.

And a third way - the EU leaves the possibility for Orban to return to democracy. At least for the sake of money. Otherwise, he will definitely lose it.

Prisoner Exchange, Grain, and Planes: Media Named Topics of the Meeting between Erdoğan and Zelensky
Canada to Grant Ukraine Nearly $350 Million for Gas before the Heating Season
Latvia Raised 300,000 Euros to Buy Bayraktar for Ukraine on the First Day
Ukrainian MFA Urges Deutsche Welle to Pay Attention to the Manipulations of Their Russian Office