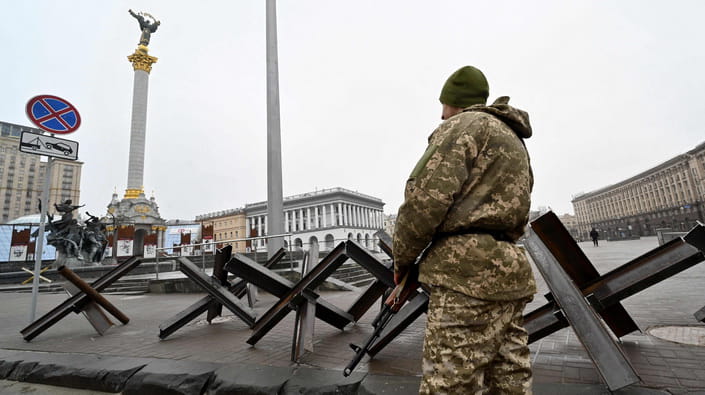 One wise saying goes that "war must knock on your door to feel it."

Yes, we are intentionally avoiding war so much that we convince ourselves: it won't happen, or it's far away and doesn't concern me. But war always concerns us. And what is happening in Ukraine is, in fact, a war for Europe and the values ​​on which Western civilization is based.

It was only the explosions on the outskirts of Ukrainian cities that brought many Western and, unfortunately, Czech politicians to their senses.

Those who were so in love with their fantasies that at the height of their wisdom they did not listen to, intentionally ignored, and sometimes punished others for holding the opposite opinion.

Fortunately, there are also many people who see reality and know the value of democracy and freedom. I'm proud that the current Czech government and its actions are proof of that.

Propaganda about the victory of Russian weapons

Soviet and Russian propaganda gave us a sense of the "invincibility" of Russian weapons and the unsurpassed strength of this geographically large and valuable Asian country. A Czechoslovak socialist upbringing instilled in us respect for the victorious Soviet army, which it mistakenly and purposefully identified with the Russians.

Anyone who opposed this propaganda and manipulative narrative was declared a fascist and a criminal.

We used a distorted image of victory in World War II - in cinema, mass culture and education.

The remnants of the socialist educational program have been preserved and teaching in schools still shows the need for an objective study of modern history.

While not diminishing the number of casualties in the Second World War on the Russian side, we must not forget that the victory was also largely based on the casualties of Ukrainians, Belarusians, and a long list of other nations. And it was not only the victory of the Soviet Union, but also the victory of the Allies, including their own casualties.

We also cannot forget the violent and imperial nature of Moscow's policy during the Soviet campaign, which resulted in the creation of a colonial system of socialist satellites, which Moscow referred to as the "peace camp."

However, Russia - not only the current one, but also the older one - lost most of the wars in its history. Especially those where it has faced a persistent resistance from a united military and civilian population, or a technologically advanced adversary. Not much is said about these wars. Russian propaganda completely silences them. But it is worth turning to this part of the story.

The Russian Empire fought a series of conflicts with the west, in what is now Ukraine and Belarus. Before the reign of Peter the Great, they fought quite unsuccessfully against the Lithuanian Commonwealth, the Poles, and the Swedes. According to statistics compiled by Vladimir Solovyov, a great Russian historian of the late nineteenth century, Russia lost more than 70% of the 50 wars in the north and west from the thirteenth to the fifteenth century.

With varying degrees of success, it tried to conquer Ukraine, consolidate its position on the Black Sea coast and penetrate the Persian southern coast of the Caspian Sea. After clashes with the Turks and Persians, the Russians were forced to retreat. Later, Catherine the Great succeeded on these fronts. Her aggressive policy was detrimental to Ukrainian and Polish statehood, as well as to the peoples of Crimea.

At the beginning of the XIX century, the campaign of Russian Emperor Paul I in India ended in complete failure, and in a few decades, Russia was defeated in the Crimean War (1853-1856). At that time, European powers were firmly united against Russia. Thanks to the unity of Europeans and the plight of Russia after the war, it was defeated in the Berlin Congress of 1878.

After these defeats, the Russian leadership was forced to turn away from Europe and begin expansion into Asia.

By the end of the 19th century, Russia already controlled the Pacific coast, so it turned its attention to the Korean Peninsula and Manchuria. Russia's subsequent defeat in the Russo-Japanese War was one of the causes of the end of the Russian Empire.

Russia played a significant role in inciting the First World War. The military leaders in Russia claimed the conflict would lead to control over the Black Sea Straits and Constantinople - today's Istanbul, then in the eyes of the Russians - "the second Rome".

After numerous military setbacks, the Russian Empire completely collapsed from within. The Brest- Litovsk peace, concluded as a result of negotiations between the new Bolshevik government and the German Empire, briefly resulted in a long-awaited statehood for Ukrainians and Belarusians.

Defeats of the Soviet Union and Soviet Russia

Attempts by the Bolsheviks to spread the communist revolution around the globe were unsuccessful. Their military campaign against Poland ended in an inglorious defeat. The Poles expelled the Russians and forced them to sign the Riga Peace Treaty.

Bolshevik Russia, followed by the Soviet Union, failed to spread communist ideology to neighboring countries before World War II. Only a treaty with Hitler dividing Poland, made it possible to do so. This was a huge geological victory for Nazi Germany. However, not everything went smoothly for the Red Army, the Russians struggled wherever they faced resistance.

As always in the "Russian" wars, it all started with a lie.

Under the Finnish flag, Soviet troops shelled their own border village, Mainila (hence the so-called Mainila incident), in order to create a pretext for war.

However, the Finns, after four months of fighting, drove the Russians out of Finland, and the Soviet Union was expelled from the League of Nations for this unreasonable, illegal attack. Soviet Russia had been accepted to the league only a few years earlier because of the rising threat from Nazi Germany.

It was only the victory of the peoples of the USSR and the Western Allies over Nazi Germany that gave the Soviet leadership undeniable legitimacy, status, and charisma. This charisma is still used by today’s totalitarian regime, in conjunction with brainwashing, forced labor, violence, and the militarization of society. The dark shadows of this system are now falling on Ukraine. Among other things, the false propaganda included hypertrophied patriotism, which survived the death of the Soviet Union and rises from the ashes today.

The collapse of the colonial system and Soviet Russia's false confidence led to territorial greed. Afghanistan fell victim to it in 1979. The Russian invasion of Afghanistan, like the Russo-Japanese War, was a prelude to the end of the empire. Then the Soviet Union disintegrated, becoming one of the great geopolitical blessings of the bloody twentieth century.

That's not a mistake, the Soviet Union did not lose the Cold War.

It was Russia that lost.

In fact, many countries of the Soviet Union, including Ukraine, won: they gained statehood.

In 1996, Russia launched a war against Chechnya. However, the bloodshed in little Chechnya in the North Caucasus proved fatal to the Russian army. In 1999, Russia launched a second Chechen war, choosing a different tactic. Chechnya was ruthlessly defeated, and Moscow appointed a brutal puppet dictator at the head of a "useful republic" within the Russian Federation.

Even Russia's aggression against Georgia in 2008 cannot be called a pure victory.

The Russian forces were uncoordinated, and the army movement did not meet modern standards of warfare. Even the Russian leadership was so disappointed by the inefficiency of its armed forces that they initiated a large-scale reform of the army.

During the first aggression against Ukraine and the annexation of Crimea in 2014, we saw the Russian armed forces much better prepared. However, at that time Russia failed to achieve its goals in Ukraine. Russian troops in the Donbas not only failed to break through Ukrainian defenses, but even lost once-conquered territories and were pushed back.

Since then, Russia's population has been preparing for war.

Propaganda became more and more intense and spread to the media outside Russia. Therefore, we must not idealize Russian society.

There are a few Russian Democrats, and we must support them even more. But most Russians know they are being lied to and are indifferent to it. Or not even indifferent, but support it, because they were infected with the virus of imperial, patriotic nationalism.

They also suspect that this is an offensive war. They will do little against it, but they will not be ready to die in it, as their grandfathers were in World War II. Support for the offensive war will continue until the first serious setbacks take place and until they learn about it.

Since 2014, the Russian army has undergone a reform, a series of exercises and rearmament. And yes, Russia today is a nuclear power led by an unpredictable leader who cannot be trusted. Russia is many times superior to Ukraine in terms of technology - aircraft, tanks, military equipment, and weapons.

However, history teaches us that statistics are not enough.

I do not like to quote Lenin, but you need to know the logic with which the aggressors work.

I fear we will have to keep this logic in mind when dealing with today's Russia. Russia is far from invincible. Ukrainians are stubbornly resisting, but they cannot be left alone. Symbols and words of support are important, but they are not enough.

Material support is needed. Anyone can help. Financially, with accommodations, support of Ukrainians here in the Czech Republic, and support of the policy of the Czech government, which helps Ukraine not only in words. Let's get together. Let us realize our strength and the strength of our alliance in NATO and the EU.

Let's support Ukraine. It is unknown how this war will end, but that depends on us and our reaction. 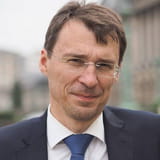 Author: Jaroslav Kurfürst
Doctor of Philosophy, Special Representative of the Ministry of Health of the Czech Republic from the Similar Partnership

Ukraine's Government Says It Has Exhausted Tools to Take Steps towards NATO
Ukraine Should Return Donbas and Crimea to Win the War - Dmytro Kuleba
Finland and Sweden Cut a Path for Ukraine's Accession to NATO
U.S. Chargé d'Affaires: "Ukraine Can Skip MAP to Join NATO" 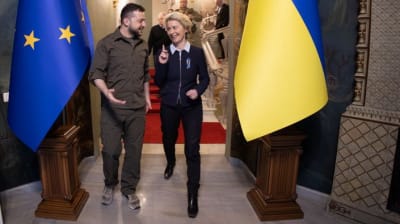 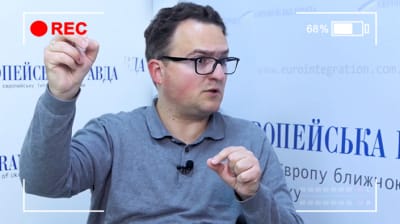 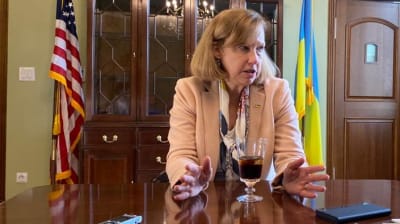