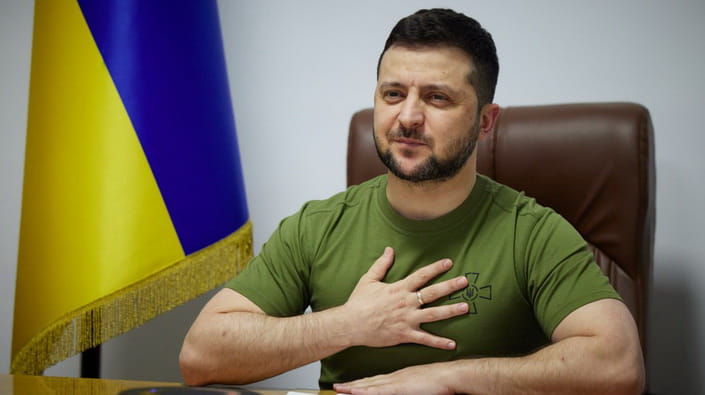 I'm talking to you from Kyiv, our capital, which has been fighting for a month. The same way as the whole Ukrainian state.

Yes, indeed, we are not part of NATO, we're not in the most powerful defense Alliance in the world. We are not one of the 30 states under the umbrella of Article 5, which guarantees them joint defense.

A month of heroic resistance, a month of the darkest suffering. A month, when Russia enjoyed impunity for the destruction of the peaceful state, along with it the whole global security architecture.

All of this happens in the eyes of the whole world.

They invested absurd amounts of money in death while the world invested in life.

Three and a half million of them are already in the territory of NATO countries. We are grateful for the support being provided to these people.

More people are leaving their homes, fleeing the terror that the occupiers brought with them.

The first hours of the invasion meant brutal missile strikes. During a month of war, Russia fired more than a thousand missiles at our cities and conducted hundreds of air strikes.

On February 24, I addressed you with an absolutely clear, logical request - to help close our skies, in any way, to protect our people from Russian bombs and missiles.

We never got a clear answer.

Ukraine does not have powerful anti-missile weapons; it has much fewer aircraft than Russia. Therefore, the advantage in the sky that Russia gest turns out to be the weapon of mass destruction.

You see the consequences today - how many people were killed, how many peaceful cities were destroyed.

Ukraine needs military assistance to save people and our cities. Assistance without restrictions. The same was as Russia is not restricted in use of its entire arsenal against us and destroying all living things: from houses to churches, from food warehouses to universities, from bridges to hospitals.

Ukraine appealed to you for planes so that we would not lose so many people. You have thousands of fighter jets, but we have yet to receive one!

We have requested tanks so that we can lift the siege from our cities, where people are now dying, where Russia is holding hundreds of thousands of people hostage and artificially creating hunger.

You have at least 20,000 tanks! Ukraine has asked for just one percent of all your tanks - provide it to Ukraine or sell it to Ukraine! But we have not received a clear answer to this request either...

Not having clear answers is the worst thing for us, being in the war.

I want to be clear: I do not blame NATO.

It's not your fault, as it's not your missiles and bombs destroying our cities. Today, by the way, phosphorus bombs were used - both adults and children were killed. I just want you to know that the Alliance can still prevent Ukrainians from dying from Russian strikes. You can save them by giving us all the weapons we need.

Yes, we are not in the Alliance. And I do not make any claims.

Ukrainians thought that the Alliance is so different from the Allies. That in matters of life and death Allies can be strong acting alone, but one you're together - you appear not strong at all.

Also, we never thought that NATO could be so afraid of Russia.

I am sure you already understand that Russia does not intend to limit itself to Ukraine in its war. Russia does not think that way. It wants to go further against the eastern members of NATO, the Baltic States, Poland and others.

Are you sure that if it happens, NATO will stop being afraid of Russia? Who can be sure? And do you have confidence that Article 5 will work?

Yes, we receive help from individual members of the Alliance. And Ukrainians are sincerely grateful to each of you who provide it to us, supporting Ukraine. But what about support from the Alliance?

Regarding Article 5: the question is fundamental. I just wanted you to know what we think about it. And I sincerely hope that we are wrong in our assessments and our doubts. That you, unlike we see it, have a very strong Alliance.

Because if we are wrong, the world is safe. But if we are not mistaken, if there is just a little doubt - then it's time to reconsider your attitude. Time to really take care of security.

Take care of security in Europe and, consequently, the world.

Ask yourself: is it possible to survive a war like this without such weapons?

If you give us one percent of your capacities - you will get a hundred percent security in return.

That's what I ask.

And there is one thing that I demand.

After Ukraine spent a month sustaining in a war against Russia - never tell us that our army does not meet NATO standards.

We have shown what our standards are capable of. And we proved how much we could add to the European and world security. How much we can do to protect all of us against aggression, against everything we value, and you value.

NATO has yet to show what you can do to save people. To show that you're really the most powerful defense Alliance in the world.

You know what we ask you to do. Our needs are on the table. Peace is needed immediately. The choice is yours.

And at the very end, I want to thank everyone who contributed to our fight.

Security Guarantees on the Way to NATO: What Ukraine Can Count On

Ukraine and international experts will look for optimal security guarantees. 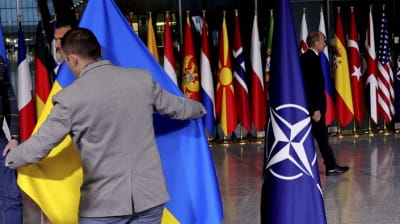