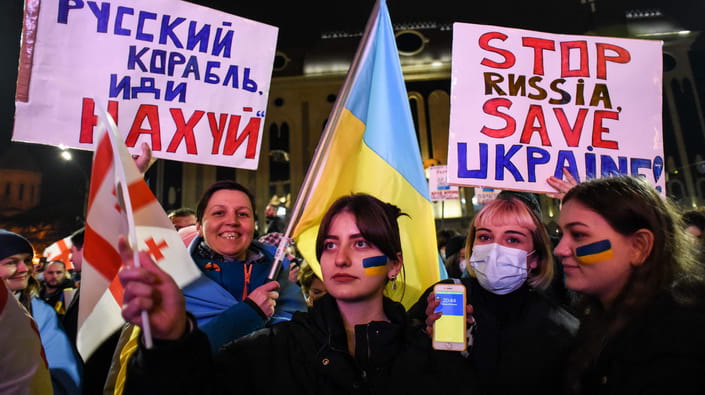 Last week, on March 1st, Ukraine had made a historic step, formally applying for membership in the EU.

In fact, Ukraine's resistance to Russian aggression has opened a window of opportunity. Not surprisingly, other countries are trying to "jump on this train" too. To some extent, this is Ukraine's regional leadership: our actions open the European future not only for Ukraine but also for partners.

But are they partners indeed?

The answer is not certain about the government in Tbilisi.

Suffice it to say that just a couple of days before the Georgian authorities signed their application for membership, another important event took place - Kyiv recalled their ambassadors from Georgia and Kyrgyzstan, signalling high tensions.

The reason for that decision with Kyrgyzstan is straightforward - the authorities of the country are one of the few in the world who publicly backed Putin's "special operation", i.e. the attack on Ukraine.

But how did Georgia, traditionally a friend to Ukraine, find itself in this company?

Said that the sanction policy of Tbilisi is certainly unpleasant, but it is not that much painful.

The real problem lies in the post-invasion support of Ukraine, where the actions of Moldova and Georgia are radically different.

Moldova is actively helping Ukraine nowadays, mostly by accepting, accommodating and helping dozens of thousands of refugees. At the same time, Tbilisi made actions that led to a diplomatic démarche.

"Brave Georgian brothers are waiting at the airport to fly to Ukraine's aid. I hope (Georgian Prime Minister) Irakli Garibashvili will show courage and allow the flight. Ukraine is waiting! Europe is waiting!" - wrote the Ukrainian Prime Minister Denis Shmygal late in the evening on February 28.

It is hard to believe, but Tbilisi has blocked the departure of volunteers who were ready to fight for Ukraine’s freedom. Kyiv agreed on a charter flight to take them to Poland and from there to Ukraine, but the Georgian authorities would not consent. Shmygal made the public statement, bringing the problem into the public sphere - but again received a firm "no" from Georgia.

This refusal was the reason Kyiv recalled their ambassador.

"The decision was based on two reasons. The first is the immoral position of the Georgian government on the sanctions imposed because Russia attacked Ukraine. The second is the decision that was taken to stop volunteers from getting to Ukraine," said Andriy Kasyanov, an adviser to Ukraine's ambassador to Georgia.

A response by Tbilisi to that was in no way logical – instead of explaining or changing its stance, the Georgian government blamed the opposition for ruining ties with Ukraine.

This position in Tbilisi has provoked sharp criticism in Georgia.

Since the first day of the Russian aggression, thousands of protests in support of Ukraine have taken place in central Tbilisi and other Georgian cities. Later, the resignation of incumbent Prime Minister Irakli Garibashvili was added to the demands to impose sanctions on Russia and provide Kyiv with all possible assistance, but the government refused to change the policy.

UPDATED:The day after we published the Ukrainian version of this story, another news came, confirming the deepening gap between Tbilisi and Kyiv. When the entire world is breaking ties with Russia trying to limit it economically, Tbilisi has negotiated with Russia ease of sanctions for Georgia. This was widely perceived in Ukraine as a Russian pay-off for the Tbilisi position, which led to one more statement from Ukrainian MFA.

Meanwhile, let's look closer at the Georgian application to the EU.

It is noteworthy that even the idea of ​​applying for EU membership was only put forward only because of the political pressure from the street.

But even doing that, the Georgian authorities avoided any mention of Ukraine and its armed struggle against Russian aggression in its statement, alleging that Georgia had made all needed to apply.

"Georgia, as an associate partner of the EU, is successfully fulfilling its obligations under and is making significant progress in rapprochement with the EU... Democracy, the rule of law, human rights, good governance are part of our daily lives."- said Prime Minister Garibashvili.

However, Brussels' view on the course of reforms in Georgia is completely different.

Georgia has been in a deep political crisis since 2020. EU has attempted to mediate parties agreed approved a memorandum the President of the European Council Charles Michel, promising crucial judicial and electoral reforms. But later, the ruling party Georgian Dream withdrew its signature, broking up the deal. The state of reforms or even the level of freedom of speech in Georgia does not meet the standard necessary to obtain EU candidate status, too.

In the three countries seeking membership, Ukraine, Moldova and Georgia, the latter has the image of an outsider and a "bad student".

This makes it possible that the EU will treat the Georgian application differently than the Ukrainian and Moldovan one.

But does all this mean that Georgia has no right to a European perspective? No way! Of course, Georgia has it.

Because Georgia is not only the government, it is above all the Georgian people.

The reaction of the society shows that Georgia has been and remains a friendly country to Ukraine, for which European solidarity is not just empty words. Of course, such a country deserves a European perspective. However, if Tbilisi manages to take advantage of the current window of opportunity, one should realize that it will happen due to, but rather in spite of the current Georgian authorities.

Last but not least, for Ukraine, it's particularly painful to see the reaction of the Georgian government as we remember 2008, Russia's attack on Georgia. At that time, Ukraine was one of the most active international voices in support of Tbilisi. Kyiv provided air defense systems, and then-President Yushchenko flew to Tbilisi to support the Georgian nation.

At that time, no one could have imagined that in 13.5 years, we would hear from the Georgian authorities that this was not their war.

Fortunately, we hear the opposite from the people of Georgia.

editor of the European Pravda