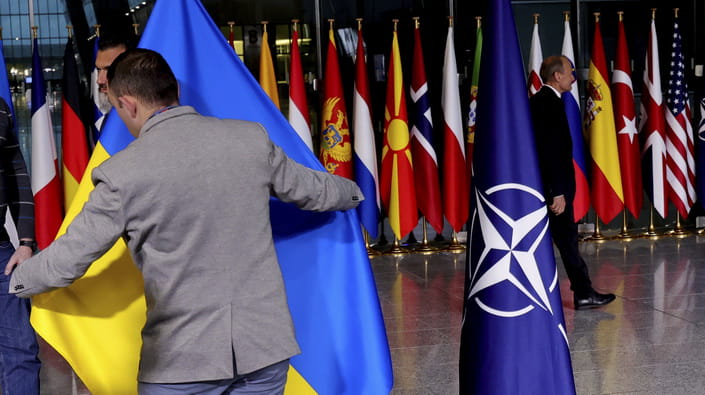 Statements that the Madrid NATO summit exceeded expectations are also sincere. Few expected to overcome the Turkish veto on the decision on the accession of Sweden and Finland would be possible in Madrid. But it came true.

However, something else is essential for Ukraine.

First, more and more sources indicate a growing understanding in the Alliance: aid to Ukraine must be increased, even from the most skeptical allied states, up to Hungary.

And secondly, we are now witnessing a change in attitude towards NATO from the official Kyiv.

A new perception of NATO

"If Ukraine were in NATO, I'm sure we would still be fighting for Ukraine's independence." These words became for many an alarm and a hint that attitude towards the Alliance among Ukrainian authorities is deteriorating again. Volodymyr Zelensky stated this on June 11, 2022, in his speech for British students.

But at the Madrid summit, everyone noticed completely different signals. In his speech at a NATO public forum, the head of the Presidential Administration, Andriy Yermak, said if Ukraine had been given a Membership Action Plan (MAP) in 2008, "today, quite possibly, there would be no war in Ukraine."

Criticism of the Alliance also remained, and it is legit. Andriy Yermak claimed Kyiv expects NATO to be more ambitious both in statements regarding the Euro-Atlantic perspective and in actions regarding assistance to Ukraine. However, even fierce Euro-Atlanticists will probably agree with such statements: of course, Ukraine needs more support and a clearer perspective.

But the main thing is Kyiv itself does not doubt the perspective anymore. At least, what Yermak claims now:

"We are not satisfied with the illusion of open doors. Ukraine will never depart from that path of full NATO membership. With their courage, the Ukrainian army and the Ukrainian people prove every day that our membership will only strengthen the North Atlantic Alliance."

Yermak stated it purposely. It was not some detail he added voluntarily. His speech had been prepared in advance.

Zelensky's foreign policy adviser Igor Zhovkva also made a similar statement. He personally came to Madrid and also assured us that Ukraine was committed to NATO integration.

Since "peace negotiations" with Moscow began in March, the top authorities seriously considered refusing to join NATO. The information policy at that time did not cause understanding among the allies or the expert community.

Moreover, it contradicted public opinion because the vast majority of Ukrainians were in favor of joining NATO. However, under the influence of massive criticism, this balance happened to change.

At some point, the authorities decided to tone down the criticism. But it avoided talking about Ukraine's membership - until this week. Now that has changed.

The rapprochement has become mutual.

NATO avoided even the slightest participation in military aid programs for Ukraine. They did not form this position independently. The White House insisted on it. In the first half of the spring, they were generally extremely cautious about increasing aid to Kyiv and were against the provision of heavy modern weapons. Over time, the US position adjusted, and the involvement of the Alliance as an organization remained blocked by several influential allies.

Brussels did not provide any conscious explanations for a long time, and only in June it finally spoke up.

The strategic concept tested NATO's adequacy. We had to see who would win this battle - "dialogue with Putin" supporters or those who understand the scale and depth of the crisis into which Russia has led the world.

Fortunately, the second group won. They adopted the strategic concept in a very acceptable form, with sufficiently rigid wording for such a document, which was approved by both the Ministry of Foreign Affairs and the Presidential Administration.

Moreover, it was adopted by consensus. And perhaps this was the green light also for Kyiv to change the public attitude towards the Alliance.

The concept indeed does not remove all remarks about the Alliance. Shamefully, NATO still does not consider ambitious decisions regarding Ukraine, the prospects of its membership, etc., as Deputy Prime Minister Olha Stefanyshyna stated on Thursday. The current US administration stands in the way.

However, there are also positive signals.

The key Alliance states are already talking about the possibility of membership. Like British Prime Minister Boris Johnson said in Madrid that Ukraine had no chance of joining NATO before, but now it does when it overcomes the intermediate stage.

In addition, if Ukraine maintains its current, updated position on the Alliance, it will help increase the number of supporters because

only those states that want to join NATO are invited.

Therefore, statements from the Ukrainian authorities in recent months (they do not really need the Alliance) essentially blocked the support by the allies.

Equally important (even more critical in the short term) was the consensus to strengthen weaponry assistance for Ukraine. That's why we heard many new announcements to deliver weapons at the summit. And we will hear even more later.

Besides, even skeptical countries, including Hungary, mentioned the seriousness of the threat, the need to arm themselves, and the need to help Ukraine.

We are likely on the verge of a significant change that must develop with the Alliance and Ukraine's constructive approach.