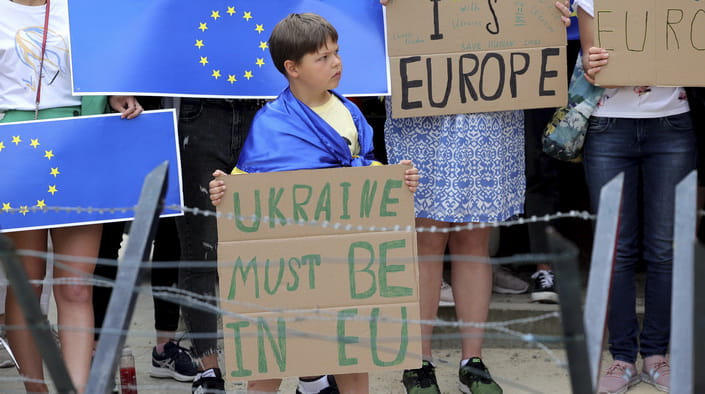 It has been more than 130 days since Russia’s war against Ukraine began. Ukraine has shown that it is able to defend itself and win the war, too, with the assistance from the EU and the international community. However, the war can be protracted. Ukraine and the EU need to prepare for such a scenario.

In the last few weeks, the EU made a historical decision to grant Ukraine the EU candidate status. Integration of Ukraine towards the EU will have very important geopolitical consequences both for Ukraine and the whole European continent.

It is crucial that EU has a clear understanding of and a strategy for what needs to be done next in order to keep assisting Ukraine on the highest level, how and for what purposes we need to mobilize our efforts.

There are some ideas, which will help better understand what will be the most important next steps.

1. What is the next key EU decision?

That is the decision to open negotiations with Ukraine. It is important that such negotiations start as early as 2023, ideally in the first half of 2023.

To achieve this, it is essential that the European Commission delivers a positive assessment of Ukraine at the end of this year in its Opinion on applicant countries/Enlargement report for Ukraine (as foreseen in the Council Conclusions). In this report, the Commission will take into account the progress made by Ukraine on the seven ‘understandables’ that were identified in the Opinion. Ukraine must by then demonstrate that it has met all the conditions that were indicated in the Opinion. After that the Council should approve the Enlargement report for Ukraine and decide on further steps, including on beginning of negotiations with Ukraine.

2. When can Ukraine become an EU member?

This assessment of possible dates is based on comparisons with the "big-bang enlargement" of the EU to Central Europe and the Baltic States. In that case real negotiations took 3 (Lithuanian example) or 4 years (Polish example). Negotiations with Lithuania started in 1999, with Poland in 1998; both countries ended the negotiations in 2002, together with other 8 countries from the region. Then it took another two years to prepare and ratify the Treaty. Finally, in 2004 all ten countries successfully became EU members.

3. What is needed to ensure swift negotiations?

(a) Ukraine’s accession to the EU is not only necessary for Ukraine, but also for the EU. The eastward expansion of democracy, stability and economic success is in the EU’s interest because it is the only way to achieve a democratic transformation in Russia;

(b) A return to effective enlargement should begin with 1) an analysis of the mistakes and failures of the EU’s enlargement policy of the last decades and 2) the implementation of the following reforms based on that analysis:

-- EU enlargement cannot be halted by the Kremlin’s blackmail and intimidation, as was the case with Ukraine after 2014;

-- EU’s future enlargement must accelerate institutional and decision-making reforms within the EU, so that they are not an obstacle to further enlargement;

-- EU member states cannot use their veto right to block EU enlargement to their immediate neighbors with whom they have historical problems;

-- The EU must regain its "hunger for enlargement", as Ukraine’s membership will strengthen the EU, not weaken it;

Then, Ukraine’s geopolitical weight will propel the whole EU enlargement process forward, which will also benefit Moldova and Georgia as well as the Western Balkans, whose integration process so far has been stalling.

4. What should Ukraine focus on before accession?

5. How can we secure the EU political will?

For that, a like-minded "Ukraine Coalition" needs to be formed among the EU Member States. It should first consist of those countries which already show strong support for Ukraine’s integration and which will hold the Presidency of the Council of the EU in the next decade: the Czech Republic (2022), Sweden (2023), Denmark (2025), Poland (2025), Lithuania (2027), Italy (2028), Latvia (2028).

This coalition should become the core of the process, similar to the so-called "Berlin Process" that was set up at the initiative of Germany to support the integration of the Western Balkans.

6. Will the war disrupt Ukraine’s integration?

The war has already had devastating impact on the Ukrainian economy. Yet, at the same time, it has radically increased EU’s will for decisive geopolitical action: Putin’s threats about EU enlargement no longer have any effect. Not only are they not stopping EU’s enlargement, on the contrary, they give it a geopolitical boost.

7. How will Ukraine’s membership benefit the EU?

Ukraine is a rich country with a huge but untapped economic potential, a developed industrial sector and a highly skilled workforce. Ukraine’s membership would significantly strengthen the economic power of our Union.

Integration into the EU is the only way in which the success of a democratic state can be established in a post-Soviet, post-totalitarian space. Ukrainian success would send a strong signal to the citizens of Belarus and Russia that they should seek the same changes. Such a development would guarantee lasting peace on the European continent. Peace is the primary interest of the EU.

8. Can we expect that Ukraine will implement the necessary reforms?

At the time of the "big-bang enlargement" to Central Europe and the Baltic States until 2004, the EU enlargement process had enormous transformative power for the candidate countries; they were in a hurry to implement reforms and to keep up with each other’s progress.

Ukraine has made significant progress in adopting the EU acquis since 2014 with the support of the SGUA (Support Group for Ukraine). If the whole enlargement process regains its initial ambition and transformative power, Ukraine is likely to be among the fastest candidate countries to implement the necessary reforms.

Member of the European Parliament, former Prime Minister of Lithuania