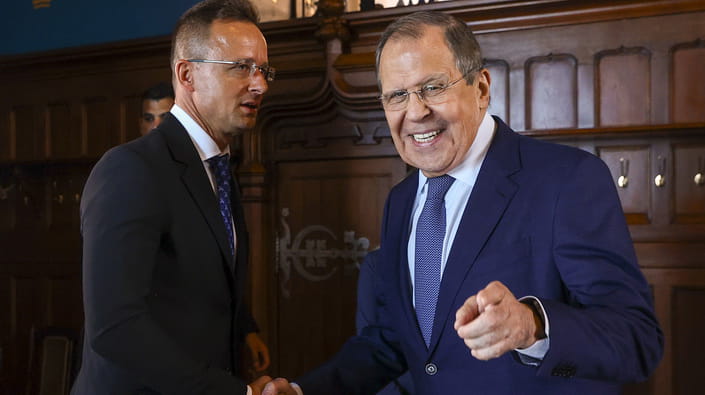 The Hungarian Minister of Foreign Affairs, Péter Szijjártó, paid an official visit to Russia on Thursday, breaking the Western diplomatic blockade of the Putin regime.

Since February 24, not a single EU top diplomat has visited Moscow.

Only one high-level visit happened in April when the world discovered the Russian atrocities in Bucha and other cities. Austrian Chancellor Karl Nehammer went to Putin. But his visit was exceptional - no handshakes, no joint statements. He went to Moscow to warn Putin of the consequences if he did not stop. They did not even invite interpreters to speak harshly and frankly (Putin speaks German).

The Hungarian visit is completely different.

His goal is bilateral trade and gas agreements in a friendly meeting with Sergei Lavrov, Russia's top international war crimes lawyer. They were smiling at one another, and Szijjártó even expressed his support for a diplomat who may face the ICC in a few years, even with regard to genocide trials.

Hungary will mention its national interest.

However, this visit is against the EU's policy towards the aggressor. Most importantly: it shows Hungary is once again ready to pick the dark side.

The Hungarian authorities were also convinced then it was for the good of the country, but they plunged Hungary into disgrace.

It started back in 1914 when Hungary found itself on the wrong side of history. It was then part of Austria-Hungary, which attacked Serbia in response to the assassination of the heir to the Austrian throne, Franz Ferdinand.

Thus began the First World War, the consequences of which were catastrophic for Hungary. Over 500,000 Hungarian soldiers died on the battlefields - way too many for a small nation. The country suffered a total military defeat. As a result, they had to sign the humiliating Treaty of Trianon, losing 2/3 of the controlled territories. So part of ethnic Hungarians was cut off from their homeland.

"Trauma of Trianon" and the desire to revise this treaty became decisive in Hungarian politics.

Budapest was ready to be part of the alliance with absolute evil to achieve it. And it did so in 1939 when Hungary joined the Hitler coalition.

They did it consciously and independently, already knowing about the persecution of the Jews. Hungary itself did the same.

Miraculously, only a few people in Hungary know these facts.

Therefore we should remind them about it.

Hungarian troops committed the Nazis' war crimes - together with the Nazis and independently. They are complicit in the Holocaust: Hungarians exterminated Jews in Budapest and occupied cities.

There were more war crimes, especially Ukraine suffered from them.

Not so many people in Hungary heard about the Koriukivka tragedy. They just don't want to bring it up. It was an unprecedented punitive operation by the Hungarian military: on March 1-2, 1943, they killed 6,700 civilians in the village of Koriukivka, Chernihiv Oblast.

One more detail: although the Second World War officially began on September 1, 1939, its Hungarian front opened in March 1939, when Hungarian troops occupied the newly created state of Carpathian Ukraine. After that, they occupied other "Trianon" lands: Romanian Transylvania, part of Serbia, and Czechoslovakia.

Hungary again suffered a complete military defeat, with hundreds of thousands of deaths. It lost the occupied territories again.

However, Hungary did not feel ashamed of its actions.

Some wanted to conduct an analog of the Nuremberg Trial for Hitler's partners, but eventually, it did not happen. Hungarian leader Miklós Horthy, responsible for numerous crimes against humanity, was in Nuremberg only as a witness.

The Soviet Union occupied Hungary and did not desire to promote the historical memory of Hungarian crimes. Soviet ideology said that socialist states could not be involved in Nazism. They hid the truth about the war.

As a result, ​​penance for crimes was never a topic in Hungary, unlike in Germany.

The representatives of the Hungarian intellectual elite know and understand the truth, but the wider society continues to live in the paradigm that Hungary is a victim. And Orbán's government has built its entire political line to such an extent that he believed it himself.

Russia has unleashed an unprecedented war in Europe.

Like the Second World War, this war is "black and white." Russia is unconditionally evil and an aggressor. Its actions have no excuses and justifications. All world actors understand this. So far, only those with nothing to lose have declared their support for Russia - the DPRK, Syria, and the self-proclaimed "president" of Belarus.

Hungary has decided to make the same mistakes again, picking the dark side. Contrary to the EU common policy, it pays its first official visit from Europe to Moscow.

Same as in 1939, Hungary does it deliberately.

Official Budapest does not see: they committed not just to Hitler but to Hitler in 1944, whose defeat is a matter of time. The Russian "superstate" will increasingly fail under sanctions. It is gradually losing the EU energy market. This is a rogue state. But Orbán, contrary to logic, decides to put all his eggs in Putin's energy basket.

Currently, Hungary depends on 85% on Russia for gas, 65% on oil, and 100% on nuclear fuel. It does not take a single step to diversify, as if it does not understand its vulnerability.

If Russia cuts off gas flow for the European Union one day, Hungarian citizens will suffer.

But only the Orbán government will be responsible for this. The government is long known as authoritarian and anti-European — the government whose actions make us remember the year 1939.