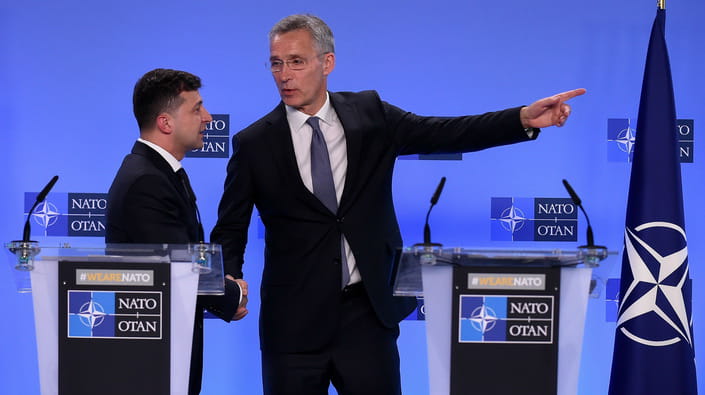 "Why Ukraine is still not in NATO?" It is not easy to answer the question that President Volodymyr Zelensky asked his American counterpart, Joe Biden, in absentia. The alliance usually states that the scope and pace of reforms do not allow Ukraine to qualify for accession to  NATO.

But if it is so, then there is a counter-question. What is the scope of reforms that will allow at least to talk about readiness for accession? And there is no answer to it.

Although the alliance declares an open-door policy towards Ukraine, it is not ready to discuss terms of enlargement now. In turn, the lack of an even roughly outlined perspective undermines the thirst for reforms in Ukraine. And this further increases reluctance to provide such perspective.

This vicious circle must be broken.

And it is possible to do so.

The reluctance of some NATO countries to even hypothetically talk about conditions of our accession has several reasons. Some are afraid of Russia or still dream of its appeasement, some are wary of the possible reaction of their voters, some do not believe in the sincerity of Ukraine’s Euro-Atlantic choice, some are disappointed primarily by the pace of reforms. But everyone is publicly talking only about the latter.

However, there is something else that unites everyone.

All Western partners, without exception, are ready to support reforms in Ukraine. Even those who avoid mentioning our country’s future in NATO support changes associated with our move to the alliance. Changes that make Ukraine more stable and more democratic. Ukrainian authorities also support conducting reforms promised during elections (though not always successfully implement these promises in practice).

Also, reforms and movement of Ukraine to the Alliance continue to be requirements of Ukrainian society, which is confirmed by public opinion polls and unanimity of expert and journalistic communities.

Social and electoral pressure makes the country’s movement to the West irreversible. However, unfortunately, alone it is not able to make it fast enough. Some reforms face systemic  resistance from bureaucracy, oligarchs, and political actors who undermine or distort changes for political or business benefit.

But Ukraine has experience in implementing sensitive change despite such obstacles.

This regards the Visa Liberalization Action Plan (VLAP). In 2015-2016, it was the "magic wand" that facilitated the conduction of reforms, overcoming the resistance of powerful political actors.

We must repeat this success. This time on the way to NATO. But we need the support of the alliance and its member states for that. We should emphasize separately that it is difficult to overestimate the impact of the VLAP. Not all Western diplomats remember this, but it is true.

Without this plan, there was no chance to create an independent National Anti-Corruption Bureau of Ukraine and Special Anti-Corruption Prosecutor’s Office or launch the electronic assets declaration system, which revealed to the country the scale of enrichment of many judges and officials. There would be no steps towards equality and non-discrimination, including guarantees of labor rights for minorities, which for many partner countries are Ukraine’s entrance ticket to the civilized world. There are dozens of such examples in the "visa- free plan."

Yes, not all reforms have been implemented perfectly, some need correction, but they have already changed Ukraine. And they were impossible without the VLAP in general.

First, the European Union has set a goal or "reward" in the VLAP: after conducting reforms, Ukraine could apply for cancellation of visas (even not automatically). Second, it gave the list of reforms, though rough but limited. Third, the VLAP provided for a monitoring mechanism, namely. It obliged the EU to review the progress of reforms and publicly acknowledge that Ukraine had complied with some of them.

All this together gave society the tool to put pressure on the government regarding concrete changes.

And the Euro-Atlantic reforms are currently sorely lacking these three components.

We offer the West to provide Ukraine with the new plan. And we understand what it should look like.

We should emphasize once again that we are aware that not all NATO members are ready to promise Ukraine membership in the Alliance, even with perfectly implemented reforms. There is a number of reasons that (so far) prevent this. But similarly, in 2007-2010, the European Union was not ready to talk about visa-free travel for Ukrainians. Nor European capital expected Ukraine to make such profound transformations. And most Ukrainians did not believe to the last moment that visa-free travel would become reality.

The same now: when an ambitious goal is set, which will not seem "threatening" to the allies at the same time, Ukraine will receive an incentive for changes that currently seem impossible.

This should be a very ambitious "road map" of reforms, the high-quality implementation of which will allow Ukraine to enter the stage of official preparation for membership. And we deliberately do not emphasize the acronym MAP, namely the NATO Membership Action Plan, because this is just one of the options that Ukraine can qualify for. After all, it can also be a substitute for the MAP, some other format, if the Alliance updates the enlargement procedure. (By the way, whatever this format is, we will eventually find ourselves at the final stage, because we will get implemented the reforms tested and approved by allies).

In fact, this is the plan to achieve compatibility between Ukraine and NATO.

Such a plan does not contain obligations tough and "dangerous" for allies. We do not ask for promises that Ukraine will be invited to join NATO. This is politically impossible for some capitals. Instead, they are interested in real reforms in Ukraine, and this is the basis of the plan. If they are implemented, Ukraine will reach the level of full compliance with the criteria for NATO membership. The political decision on the further format of relations remains with the Allies.

And in the future, when all capitals are ready and given the accession conditions which would not mean an automatic declaration of war with Russia solely upon the fact of Ukraine’s membership in the Alliance, the way to our full membership also remains open.

The West can allow themselves this level of ambition.

We should emphasize: NATO’s Compatibility Plan must contain complex changes that face strong resistance. Real and not fake judicial reform; successes in the fight against corruption; not only approval but also implementation of the SBU reform should be on this list. Its implementation should fundamentally change, reform Ukraine, make it more stable and prosperous, and thereby change the balance of powers in the region, also affecting the democratization of Russia. All this is the super-objective of the West.

Because this is the only way to achieve a breakthrough in relations with NATO. The Alliance is tired of promises regarding reforms, which are then turned upside down. It is not ready for dialogue about membership.

And also because this is the only opportunity to make revolutionary changes that will allow the authorities (either current or the next one, if current will not be able) to demonstrate that it has not only promised reforms but also has implemented them. Moreover, these reforms actually determine our relations not only with the Alliance, but also with the EU, the United States, etc., and their development will depend only on the ambition of the authorities’ actions.

Monitoring by NATO and public results, which should be foreseen in this plan, will remove the questions on quality and scope of conducted reforms, and emphasize the importance of actions of the authorities regarding modernization of the country.

However, we are aware that this proposal will not delight either side at first.

Organizations that are co-authors of this text have been discussing these ideas with Western diplomats since February-March. And we have heard enough scepticism. For the number of NATO countries, this step is also too bold, because the Alliance has never done this before. However, innovative and brave steps are crucial in the new global reality.

In turn, this idea is not ambitious enough for Ukrainian authorities and entails too many commitments, while the President’s Office, the Ministry of Foreign Affairs and the Government publicly state their desire to obtain the MAP now and without any conditions. But we insist that this is a historic opportunity that should be used.

Our country needs the transformation of Ukraine into a democratic, stable, rule of law state. However, the whole world will also benefit from these changes, and this will strengthen the Alliance. And we are counting on NATO’s help.

Providing such a roadmap or compatibility plan with NATO would be the most effective support for democratic reforms in Ukraine.

Network for the Advocacy of National Interests ANTS,