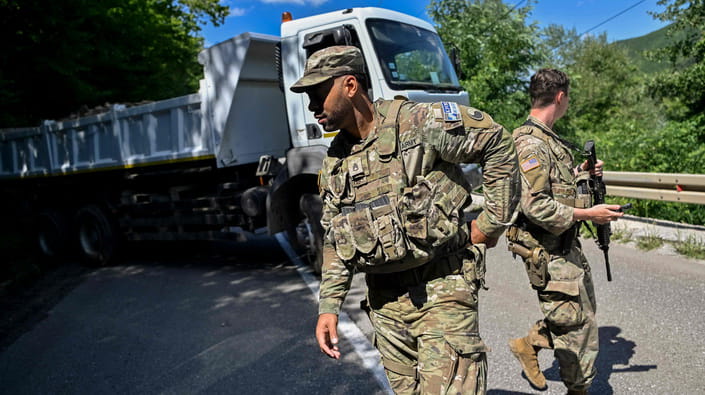 Serbia and partially recognized Kosovo were on the brink of armed conflict. Kosovar authorities asked local Serbs to switch to Kosovo license plates and I.D. cards on August 1 because they still use license plates and documents issued by Serbian authorities, refusing to recognize the Prishtina government and its institutions.

Serbia and Russia (as usual) added fuel to the fire.

In response, the Serbs erected barricades and even fired at the police (later, it became known that 11 people were injured).

Serbia put its army on high alert, and Russia accused Kosovo, or rather the West, of provocations aimed at "expelling the Serbian population from Kosovo."

Fortunately, the escalation was avoided - on the night of August 1, the Kosovo government, after a meeting with U.S. Ambassador Jeffrey Hovenier, pledged to postpone implementation of the decisions for 30 days, on the condition that all barricades are removed and complete freedom of movement is restored.

However, the crisis has not been resolved in any way.

Kosovars have gotten used to living in constant tension since 1998 when war broke out in the region.

Although the city is guarded by KFOR forces (i.e., NATO peacekeepers), clashes in the city occur regularly.

Even though Serbs have many privileges and receive two salaries (from Kosovo and Serbia), they do not want to live by the Kosovo rules. And official Belgrade's main goal is to preserve the Serbian presence in the region and, if possible, to block any attempts at integration.

Only under such conditions Serbia still has a chance to return at least the North of Kosovo.

This was not the first crisis in Kosovo. So it is unsurprising that people in Pristina were living their normal lives that day. The locals are so used to such circumstances, and they did not care about the tension in Mitrovica. Moreover, it is now the wedding season in Kosovo, and the entire diaspora has come back, so the streets are getting crowded.

"We are protected. NATO is with us. What can the Serbian army oppose to NATO?" - this is the constant answer of locals to questions about a possible war.

However, not everything is so simple. Social media in Kosovo just went crazy.

People posted all sorts of nonsense that Albanians were preparing to attack Serbia at night, unleash hell on the Serbs, even that someone had shot a Serb, etc.

The tweet of Ukrainian MP Oleksii Honcharenko about aid to Kosovo from the Ukrainian Armed Forces caused an additional uproar.

Ukraine does not recognize Kosovo yet. And the Ministry of Foreign Affairs made it clear by writing about the tension in the "South of Serbia." However, "aid from Honcharenko" was reported by the local media as "a good sign from Ukraine."

The current crisis has only one winner - the president of Serbia, Aleksandar Vučić.

He surprised many people with his exaggerated dramatism. The Serbian president, though, faced a tough challenge.

On the one hand, in front of the local audience, you have to show yourself as a courageous and uncompromising fighter for the country's unity. But on the other hand, for the West, it is necessary to position yourself as a responsible politician who, with the last strength, holds back the radicals.

The conflict in Kosovo has become a lifeline for the Serbian president.

Such a strategy lets Vučić keep room for maneuver and hope to continue to avoid imposing sanctions against Russia.

Challenge for the E.U., the U.S., and Ukraine

The current crisis is a reflection of the collective West's failure to come up with a working strategy for Kosovo and Serbia.

The E.U. thought the joint movement to the European Union should at least somehow reconcile Prishtina and Belgrade. However, this strategy has obviously failed.

Even though Kosovo has a European perspective, it has not obtained E.U. candidacy or even a visa-free regime.

Serbia has all this, but the anti-Western propaganda has been pretty fruitful so far - the majority of Serbs are against joining the E.U.

The United States is much more decisive. Although the U.S. ambassador convinced the Kosovo authorities to postpone the decision, the U.S. support it.

And at the same time, the crisis between Ukraine and Serbia is sharply deepening. Serbia doesn't hide who exactly it supports in the war with Russia. Instead, the Kosovar government, in its statements, expresses unquestionable support for Ukraine, condemns Russia's actions, and blocks its propaganda media.

This does not mean that Kyiv should recognize Kosovo right now. But we should admit: Ukraine now has much more in common with this country than with Slavic and Orthodox Serbia.