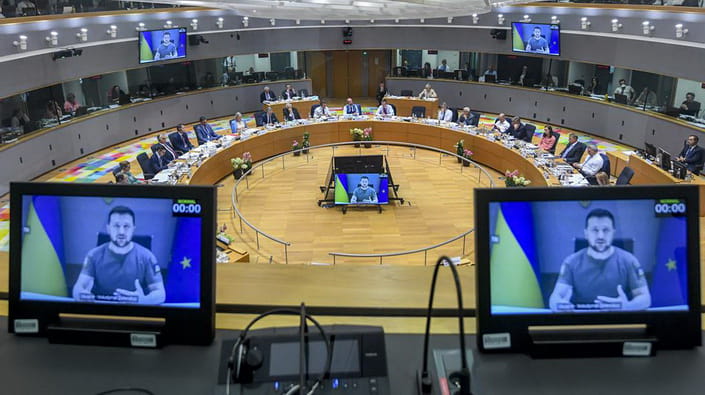 This news, which seemed absurd and impossible before February 24, has become a reality. Even a few weeks ago, there were reasons to doubt the success, but the persistence of both the government team and non-government actors performed miracles. But what's next?

Will Ukraine follow the path of those countries that have been stuck in the candidacy for many years?

After all, is the candidate status decision final?

From Versailles to Brussels

Before considering the action plan, it is essential to understand how the breakthrough in the Ukraine-EU relations happened. Worth mentioning that the historical shift happened a while ago.

It was stretched in time and started in the spring. On the night of March 10-11, the extraordinary EU summit in Versailles agreed to consider Ukraine's application. "We can describe the essence of this decision by the phrase: Ukraine will join the European Union," European Pravda explained then. Three months ago, it might have seemed "too ambitious," but it actually corresponded to the state of affairs.

Then happened the final breakthrough in European minds.

After all, in the previous 20 years, when Ukraine declared its aspirations for membership, the EU had never officially recognized this goal as achievable. Everything was based on the naked faith of Ukrainians.

It got ridiculous sometimes.

For example, in documents approved on behalf of the European Union, they never called Ukraine a "European state," only a "European country." So this name does not coincide with the wording of the EU Treaty, which guarantees that any European state may apply for membership.

Another example is how zealously European diplomats fought to ensure that no document contained Ukraine had a European identity. During the negotiations on the Association Agreement, the then chief negotiator Kostiantyn Yeliseiev openly trolled his colleagues from the EU, offering them to write in the agreement that Ukraine has an "Asian identity" or "no identity."

The EU tried eliminating even a hint of Ukraine's right to apply for EU membership.

Therefore, the March decision, when the summit not only recognized the legality of the Ukrainian application submitted according to the procedure but also instructed it to begin its immediate consideration, was an incredible breakthrough that laid the foundation for the candidacy.

The decision on June 23, of course, did not happen by itself.

Many people contributed to making this decision possible is a separate important topic, which we will return to at the end of the article.

But the breakthrough in the Europe consciousness in Versailles was the foundation of the Brussels summit's success.

And now about the question: so how long to wait now?

Ukraine Is Not Turkey

When Ukraine tried to reach out to its EU partners that it must obtain candidate status now, without any delays, one of the points was the need to avoid public distrust, which would have catastrophic consequences.

A favorite point used to fuel despair is the example of Turkey. Like no one is waiting for Ukraine in the EU, candidate status means nothing. Look, they say, at Turkey, which has been a candidate for over 20 years, the same awaits Ukraine.

They take a real fact as a basis. Then they deform it or skip some elements. As a result, the example is "worn" on Ukrainian history. It does not correspond with reality but resonates with people's anxiety.

So the fake begins to feed itself. So then Russia or its agents do not need much effort to spread it.

Turkey has indeed had candidate status since 1999, that is, for more than 20 years, and indeed remains just as far from joining the EU. It is probably even further from the goal now than in the year of obtaining candidacy. But this is the only true element in this fake story.

First, let us pay attention to how different the Turkish path is from the Ukrainian and other EU candidate states.

Turkey applied for membership in 1987 but was declared a candidate in 1999 (!). Ukraine's candidate status was approved in record time - in just four months. For other countries, it took about a year and a half. Turkey needed another six years to start membership negotiations after obtaining candidacy. In 2006, it opened and, on the same day, closed the simplest negotiating chapter on cooperation in science (that is it, no negotiations at all). Since then, for 17 years, not a single chapter has been closed.

Finally, the 16 current EU member states applied for membership later than Turkey (or even much later) and have long since joined the European Union. It took 12 years in many countries, from application to full membership!

Turkish reasons for the delay have nothing to do with Ukraine.

Let's be honest, Turkey is still not European mentally, traditionally, culturally, and identically. And it was even less European in 1987. Let us remind that in 1980 a coup took place in Turkey, the third one in 30 years. Until 1982 the country was under military rule! This is definitely not something that reminds a sustainable democracy. Incumbent President Erdogan is also pursuing policies fundamentally at odds with the European vector.

Having a different identity from Europe is not necessarily a bad thing. They are just different. However, because of this, the EU has always been cool about the Turkish accession. Europeans have never considered them sincere. For a long time, the EU has been making outspoken statements that Turkey's EU accession will never happen.

Secondly, Turkey is in a state similar to a frozen war with an EU member state, Cyprus - the northern part of the island is occupied by Turkey. Europeans once thought negotiations with the EU would resolve the conflict, but this did not happen. However, Turkey's accession to the European Union is impossible under these conditions - Cyprus will block the final decision.

It is not comparable with Ukraine either.

Other countries that have been negotiating with the EU for a long time are not good examples for Ukraine too.

Serbia is a satellite of Russia in the Balkans, which openly refuses to pursue the EU common policy. And it makes membership talks meaningless.

Bosnia has not even obtained candidate status since it is a failed state with non-functioning state institutions.

North Macedonia has not been able to start negotiations for 18 years due to a blockade by Greece and then Bulgaria over national identity.

One can bring up the Hungarian-Ukrainian dispute. But it is different. Ukraine and Hungary can easily compromise on that. But the conflict remains so alive because it is politically interesting to Orban to "warm up" his electorate. Hungary does not block Ukraine's path to the EU despite the language and education dispute.

The only country that can partly relate is Montenegro, which became a candidate in 2010 and started membership negotiations in 2012. However, the countries are not so similar, as Ukraine is much more ready to join the EU. Thus, only in 2008, i.e., two years before the candidacy, Montenegro started implementing the Association Agreement. Ukraine has been implementing it since 2015. Moreover, it had to reform more deeply according to EU standards before the accession process.

But the most important similarity between the countries does not depend on dates.

The events of recent years in Montenegro show that as soon as the government slows down reforms, the movement towards membership stops. And the resumption of reforms restores rapprochement.

That is why Ukraine's friends in the EU emphasize and repeat: speed of Ukraine's EU accession depends on Ukraine itself.

The EU summit has left the list of completely unchanged seven requirements. The European Commission has not changed its approach to the possibility of depriving the candidacy if Ukraine violates its commitments and/or begins to repeal previous European reforms.

Find out more in the article Ukraine Be Deprived of EU Candidacy without Reforms: Details of the Commission Opinion.

The only thing that the EU clarified at the summit: the next stage, the start of accession negotiations, is possible only if all the EC conditions are fully met. In other words, the option "let's show progress, do a little bit, and then take the roundabout," many politicians' favorite, will not work out this time.

And this again raises the issue of the appointment of the Head of the Specialized Anti-Corruption Prosecutor's Office, which Bankova is blocking. Attempts to fool the EU will provoke an unpredictable reaction, especially since many Europeans believe they have granted Ukraine this status in advance.

When Will Negotiations Really Start?

First of all, it is necessary to dispel the popular opinion that Ukraine is supposed to meet these seven conditions by the end of 2022. That's not true. The first evaluation will take place in November-December. Some requirements take longer to fulfill. For example, legislation on national minorities should not only be adopted but also passed through the Venice Commission's expertise.

Therefore, the most optimistic scenario to start accession negotiations is the summit in June 2023.

But only case if the government is really focused on the reforms.

Well, the most crucial requirement: by this time, the active phase of the war must end, and martial law must be lifted, at least in Kyiv and a larger territory of Ukraine. Officially, nobody has made such a statement, but otherwise, the accession negotiations seem unrealistic.

First, all talk of membership in one, two, or three years is nonsense or deliberate deception. Why some Ukrainian politicians make such statements remains a question. The reform scale that will await Ukraine during the negotiations is incomparably larger than the Association Agreement. So there is an array of reforms ahead that cannot be fulfilled in a couple of years.

Secondly, there is a condition that does not depend on Ukraine. Before accepting Ukraine (or any other state), the EU must enact internal reform to revise the principle of consensus. This difficult process is not going to end in the next few years.

The EU will be ready to close the last negotiating chapters and accept several countries at once only after the reform. And Ukraine's task is to catch up with the Balkans by this time.

Even five years from now on seems unrealistic.

Various sources, including Ukraine's European friends, estimate the process could be completed by 2030. This is an ambitious goal but a realistic one.

In recent months, candidate status has united all EU supporters. The government and the opposition, all sorts of non-governmental actors, and even activists who are ardent opponents of the government have all fought to make the status decision a reality. And every element here was crucial.

Zelensky's address to the parliaments; visits of government and President's administration representatives; a tour of Ukrainian activists and parliamentarians in the capitals; advocacy articles, and appeals were able to reach every capital and convince even skeptics.

Now it is just as necessary that EU accession becomes a top priority for the whole country, not for months but for years. This should unite all political actors.

This is a question of Ukraine's future.